As 2020 has presented communities across the country with economic hardship, social unrest, and racial injustices, we look to our local history to help guide us through these troubling times. Curator and artist Grace Gutierrez, a Longmont native, recognizes the importance of learning local history. She took on the task of researching the significant events addressed in the exhibition. She has asked four Colorado based Latinx artists, Cal Duran, Javier Flores, Adrian Raya, and Ramon Trujillo, to create three Día de los Muertos altar installations to celebrate the lives and legacies of local Latinx individuals we have lost. These artists turn to our lost loved ones for answers, asking for guidance to lead us through social unrest and policy reform. Día de los Muertos 2020-Our Past and Present becomes an urgent reminder to learn from our history and reflect on the ways our ancestors stood for justice. Ultimately, we offer a space to celebrate the lives and legacies of influential Latinx individuals that have shaped this community. 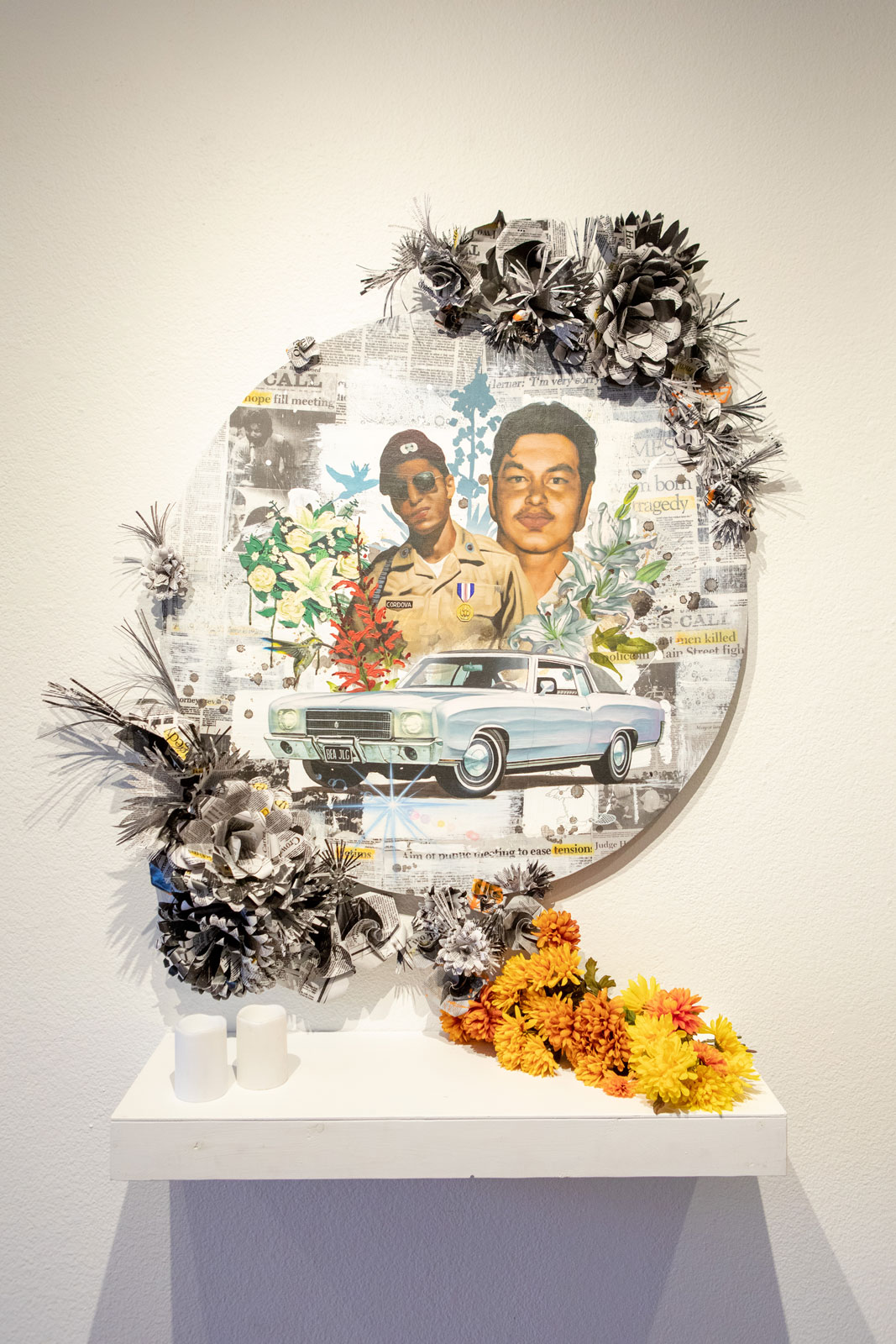 Raya’s practice challenges the ways in which the Western art canon has omitted minorities from its central discourse.  His ability to mimic the masters is his way of poking fun at art history and rewriting a vital role for Latinx individuals.

Trujillo takes a different approach with a more contemporary style, emphasizing color and lively expression. With their collaboration, the artists present an altar for two friends, from two friends, honoring great loss.

An altar by Adrian Raya and Ramon Trujillo

On the evening of August 14, 1980, two Longmont men, Army veteran Jeffrey “Beaver” Cordova and Juan Luis Garcia were tragically shot and killed by Longmont police. The incident began with a routine traffic stop by rookie Longmont police officer John Davis. A group of five young passengers drove by in a 1976 Monte Carlo, all passengers Latinx except one Anglo, who leaned out of the car and shouted obscenities at the officer. Glenn Herner, another Longmont police officer witnessed the shouting, so he took off after the Monte Carlo. When Herner stopped the Monte Carlo in a parking lot near 11th Avenue and Main Street, the driver showed his identification. Herner was only interested in the man who had shouted at him: “I want you with the big mouth,” he said, pointing to the blond passenger. The man got out of the car, but when he realized that Herner was going to issue him a ticket for harassment, he refused to show his ID and tried to leave the scene. Both officers Herner and Davis—who had now arrived—struggled to subdue him. The driver of the car and one of the other passengers left the scene. Two of the passengers stayed behind to help their friend, Beaver Cordova and Juan Luis Garcia.

In the fight that followed, Herner pulled his gun and shot Garcia in the chest, apparently because he thought the flashlight Garcia was holding was a weapon. Shortly afterwards, Davis fired a shot into the air, and Cordova began to run across Main Street. Herner, who did not see who fired the second shot, thought that Cordova had wounded Davis and was fleeing with his gun. He took aim across the hood of his cruiser and shot Cordova in the back. Garcia died immediately, and Cordova died in the hospital a few hours later. Neither Cordova nor Garcia were armed.

Officer Herner was tried for manslaughter in March, 1981, but was found not guilty by an all white jury. The Longmont Latinx community was saddened and outraged by the trial outcome. Following the incident, a group of 12 Longmont Latinx community members created El Comité, a group advocating for police accountability and increased opportunities for Latinxs of Boulder County. El Comité set forth to interact constructively with Longmont’s City Council and police department to establish long-term policies and procedures to prevent similar tragedies from happening in the future. El Comité continues their mission to this day to improve the social, educational, and economic status of Latinx individuals and to facilitate communication and understanding between Latinxs and non-Latinxs.

Through a very intentional collaboration, artists Raya and Trujillo honor Cordova and Garcia, emphasizing the bond of two individuals. Collaged newspaper articles that ran in local publications following the shooting highlight the universal language of tragedy and loss. With disparities of police related deaths in black and brown communities 40 years later, artists Raya and Trujillo examine the continued importance of Cordova and Garcia’s story. The recent deaths of George Floyd, Breonna Taylor, Andres Guardado and countless others confirm that what we are dealing with is nothing new, but how we approach reform drives hope for future generations.

A ceramic sculptor, painter, and mixed media artist, Duran embraces his spirituality in all his works to authentically reflect his experiences and truths. With his altar installation, Duran addresses Longmont’s racist history of Ku Klux Klan presence, telling the story of the locals that organized to fight back against white supremacy. 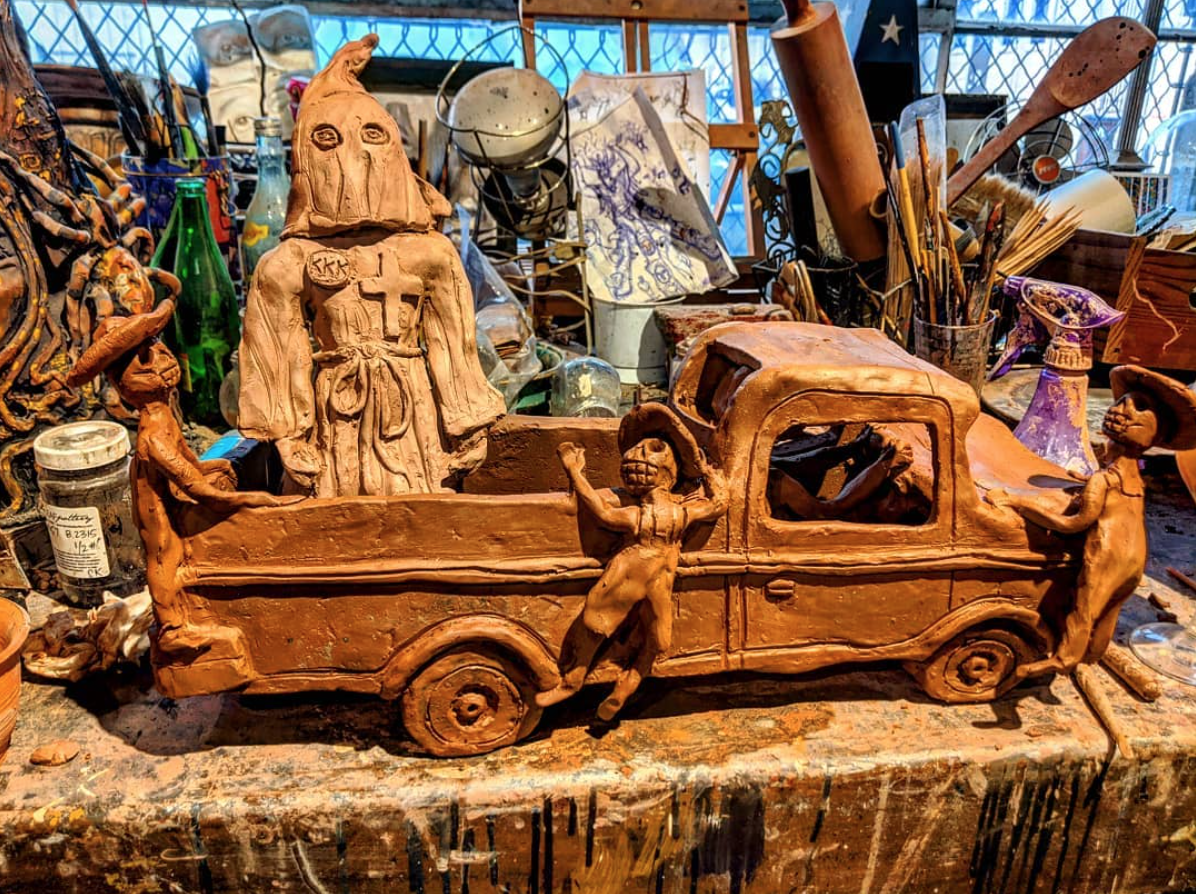 An altar by Cal Duran

Many Americans in the early twenty-first century think that the Ku Klux Klan was only active in the southern parts of the United States, directing their hatred and lynchings against African Americans. It may come as a surprise that the organization had a strong presence in Colorado, and to learn that its attacks in Longmont were targeted at Latinxs. The KKK emerged in Boulder County in 1922 when Colorado’s Klavern No. 1 (based in Denver) initiated 200 members into a new Klavern in Boulder, only to quickly spark interest with a similar sized group in Longmont.

Klan members dominated Longmont’s government in the mid-1920s. A majority of the city councilors, the mayor, school board members, and various others were Klan affiliated. Klan members flew their flag on the city’s official pole and erected an 8-foot cross in electric red lights at the intersection of Main Street and Fourth Avenue. The Longmont Times-Call, a Klan supporter at the time, described the cross as “the most effective and beautiful decoration of its kind ever displayed in Longmont.” Signs appeared in local stores and restaurants saying “Whites Only,” “White Trade Only,” or even “No Mexicans or Dogs.” Around the same time, a massive Klan parade where about 2,000 to 3,000 Klan members from northern Colorado—all in their white hoods—marched down Main Street. Longmont had about 6,000 residents at the time, and the appearance of so many Klansmen was frightening to many.
José Hilario Cortez, the informal head of Longmont’s Latinx community during the 1920’s, openly denounced Klan presence in politics. Cortez was a person to whom local Spanish-speakers turned to for advice and was someone who played a major role in Latinx advancement and politics. He often held community meetings in his home and encouraged everyone to vote. According to local legend, sometime in the 1920s, there was a showdown between the Klan and a group of Latinx men on the southeast corner of Third Avenue and Martin, which was the area the Klan’s rallies were held. At one nighttime meeting, dozens of armed Latinx men appeared, led by Jose Hilario Cortez. They warned the Klan that if any one of them was harmed, they would respond with vengeance.

Artist Cal Duran celebrates Cortez and his men for driving the KKK and their hatred out of our community. With sculptural relics depicting scenarios from Longmont’s racist history, Duran draws inspiration from retablos, elaborate devotional works created to tell impactful and spiritual stories. He confronts death, portraying someone’s last moment with honor and grace but refuses to ignore the violent outcome of bigotry and racism. Duran believes the very act of creating directly channels our ancestors, and with this altar he shows gratitude for what they have accomplished for us. 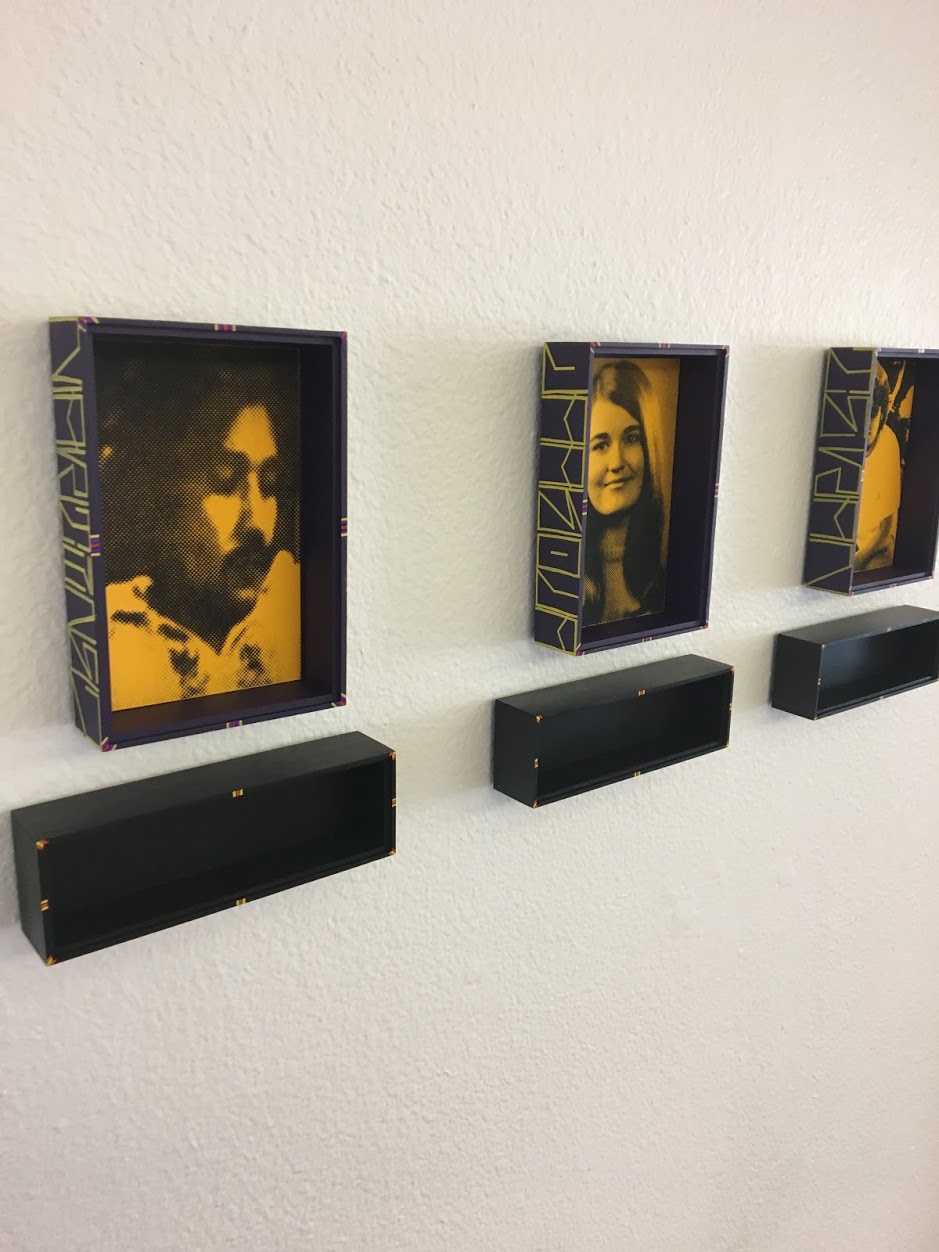 His work recontextualizes ancient indigenous imagery and Aztec codices to discuss modern topics and social issues. His ability to discuss his own adversity makes for approachable and compassionate work. Flores created an altar for Los Seis de Boulder, a group of six Boulder activists that were killed in a series of car bombings during the Chicano movement of the 70’s.

An altar by Javier Flores

On May 27, 1974, a car parked near Chautauqua Auditorium in Boulder exploded with so much force that it shook buildings and homes for miles around and could be heard throughout most of the city. In the car were three young occupants, all killed by the explosion: 26-year-old Reyes Martinez, Una Jaakola, age 24, and University of Colorado student Neva Romero, age 21. Two days later another car exploded in suspiciously similar fashion in a Boulder parking lot. Killed in the second blast were Francisco Dougherty, 20, Heriberto Terán, 24, and Florencio Granado, age 31.The six individuals, who are now referred to as Los Seis de Boulder, were all friends and fellow Chicano activists heavily engaged with Colorado’s Chicano movement.

During the time, a large number of Latinx students attending CU Boulder were active in groups such as MAP (Migrant Action Program) and the more politically charged UMAS (United Mexican American Studies Organization) protesting global and local issues affecting their people. Major topics of interest in the groups included the Vietnam War, oppression caused by U.S. colonization, farm working conditions and equal opportunity acts. The university disliked the momentum these groups were gaining and pushed back, targeting members of UMAS by “losing” their financial aid files, cutting their programming, and blacklisting hundreds of Latinx students from campus with restraining orders. In May, 1974, right before the bombings occurred, UMAS organized to occupy the equal opportunities office at CU Boulder or, TB-1, to address the blacklisting. What followed was a tragedy that shook Boulder County’s Latinx community.

Government entities such as the FBI and Bureau of Alcohol, Tobacco, Firearms and Explosives and local law enforcement insist the six young activists possessed poorly constructed homemade bombs and the explosions were accidental. However, friends, family, Boulder’s Latinx community and the Latinx community at large, believe that Los Seis were killed because of their political activism and, in some cases, leadership roles within the Chicano Movement. These six young individuals are still powerful symbols within the Latinx community. After 40 years, the two car bombings are still the most important unsolved crimes in Boulder County history.

Javier Flores honors los Seis de Boulder in this altar, honoring their efforts and lives. Activism and protest are fundamental tools leading to change, and Flores celebrates the contributions Martinez, Jaakola, Romero, Dougherty, Terán, and Granado made. Flores plays with the idea of compartmentalizing with his sculptural altarpiece. Individuals play many different roles; los Seis de Boulder were students, activists, revolutionaries, but also friends and family members. These roles contribute to a larger whole, our local Latinx community, the Latinx community at large, and even our families. Flores states that altars are meant to represent our family and ancestors, but they also force us to question who we consider family. To embrace others into our own family circle is an act of revolution, and los Seis have become significant members

Find out about the latest exhibitions, programs, and events at the Firehouse Art Center!